The hotly-anticipated Faena Art Dome opened Tuesday night just in time to celebrate The Daily’s Miami edition, which stars Natasha Poly in an editorial lensed by Sebastian Faena. Poly was among the evening’s hosts, which also included Alan Faena, Ximena Caminos, Brandusa Niro, and Juan Gatti, the Dome’s designer who is known as “the Michaelangelo of the Faena.” The event was presented by Persol, Mercedes-Benz, and Papyrus.

Guests were transfixed by the projection of Gatti’s film “Contraluz,” as well as Persol’s popular photo booth. Papyrus enlisted illustrator Deanna First to create one-of-a-kind illustrations for attendees. Adding to the circus-like ambiance were acts from the cast of C’est Rouge, a Blanca Li-produced spectacular that’s currently showing at the Faena Theater. We have added x20 photos of Hayden and Wladimir at the event …

Sorry for the lack of news, I myself just got married! I seem to have less time for the websites at the moment, but Hayden has big news so I have made some quick updates for you guys. Firstly.. Hayden and her fiancé Wladimir Klitschko are expecting their second child together! Hayden is also confirmed for Nashville Season 5.

“Hayden’s informed her bosses this is on their agenda and they’re more than happy to incorporate a baby bump into the show in some way,” said a source.

You can check out the little promo video here:

We found some outtakes from the Belk 2014 campagne in HQ, plus Hayden was also spotted at an event in Oslo on Oct 1st, and again in Tel Avivi with Wladimir on October 3rd. We have added some photos to the gallery…

Hayden looked healthy and happy as she spent time with her father Alan ‘Skip’ Panettiere in New York City on Wednesday, we have added some candids to the gallery …

Hayden was snapped smoking a cigarette and reading a book Underboss: Sammy The Bull Gravano’s Story Of Life In The Mafia in Los Angeles on July 4th 2016, we have added a few pics to the gallery.

The book Underboss is about Sammy the Bull, the former underboss of the Gambino crime family. He is known as the man who helped bring down John Gotti, the family’s boss, by agreeing to become an FBI informant.

It was also noted that Hayden wasn’t wearing her engagement ring, but she soon shot rumors down when posting a black and white photo of her with Wladimir, 40 and their daughter Kaya, Hayden wrote: ‘Missing rings don’t mean the end of relationships. Blessed to be with my beautiful family’ 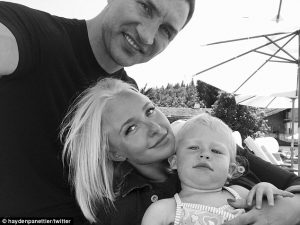 Hayden Panettiere has always tried to be a good girl. In the mid-2000s, she was one of the few winsome actresses who made it a point to stay far away from the DUIs, shoplifting charges, and paparazzi crotch shots that were the norm for other starlets her age. The Palisades, N.Y., native was only 16 when she was cast as Heroes’ invincible cheerleader, Claire, a role that made her an instant celebrity — and, it was assumed, the next young lady in line for a public meltdown. “I grew up with the Lindsay Lohans and the Paris Hiltons,” she says one night in early February while she’s curled up in the living room of her Nashville home. “I was in the same generation. I was expected to do the exact same thing. I was watched like a hawk to not fall into the same groove, and I fought against that for so long.”

When GQ asked her in 2007, “When do you intend to become the latest screwed-up girl in Hollywood?” she responded, “Never, never. Cross our fingers.

“You can’t schedule rehab for me,” she continued. “I think I’m going to be one of those boring girls.”

At least until her mid-20s, Panettiere was right. Her life was drama-free, even as she remained as big of a star as ever, playing country troublemaker Juliette Barnes on Nashville. She earned two Golden Globe nominations for best supporting actress and had a daughter, Kaya, with her fiancé, Ukrainian boxer Wladimir Klitschko. Then last October, the 26-year-old made an announcement that she’d spent most of her career trying to avoid: She was going to rehab, taking a hiatus from Nashville to get treatment for postpartum depression. She wasn’t as untroubled as she’d been pretending to be, and she needed help.

Telling the truth turned out to give her the kind of public embrace she’d been looking for all along, with everyone from her Nashville castmates to online commenters saying how appreciative they were of her for speaking out. “The more open I was, the more acceptance I got from people,” she says. “I got so much support and so much love. I was floored. I feel much more exposed, yes, but in a great way.”

In the past, Panettiere hasn’t been openly opinionated about much — she supported Barack Obama in 2008 but isn’t planning to share her political views this election. “I was really young and I’m not sure that I did it right,” she says. But she has strong words for anyone critical of those suffering from postpartum depression, especially those who say the disease is not real. “It’s like you have no idea what you’re talking about,” she says. “If you think for one second that a mother wants to feel that way toward her child, you’re outta your mind. It is one of the most debilitating, scary, guilty feelings that you can ever feel. That a mother would not be able to connect with their child, would not be able to get a grip, or would not know what’s going on, for anybody to say that it’s false or created by us, you must have your head examined.”

At the beginning of the year, she returned to filming Nashville, which begins the second half of its fourth season on March 16. It has been tough for her to go back to playing Juliette, since the character is still in the midst of dealing with postpartum depression (a coincidence, but “it’s definitely interesting how much it has mirrored my life,” she says). “It was strange having to throw myself back into that frame of mind,” she says. “The way I do things is to pull from my own personal experience and sometimes even turn myself into what I’m portraying so that I can pull from my life and step into that person’s shoes by being able to relate.”

In general, the show has turned into more of a daytime soap opera (music CEOs falling off roofs and dying! Liver transplants gone wrong! Children you think are yours that turn out to be your dead brother’s!) than the sassy sing-off between Juliette and country legend Rayna James (played by Connie Britton) that audiences originally signed up for. But fans are still unable to turn away from the mayhem, even if they say they want to. “What’s that line from The Godfather?” Panettiere says. “‘Just when I thought I was out … they pull me back in.’ It’s really so true. We all want to feel better about our lives. We like that drama. Those highs and lows and peaks and valleys of life, that’s what keeps us satisfied. That’s what people like to see.”

We have added more promo photos for Lip Sync Battle Hayden vs. Eva that aired last night. If anyone has HD screencaps from the show, please send them into us!